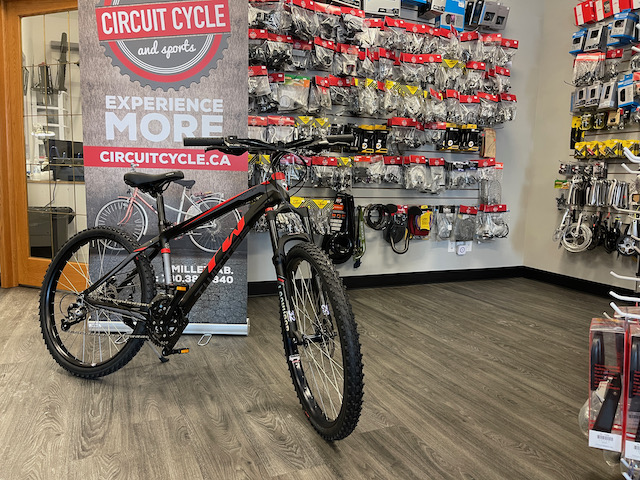 Based on the beautifully crafted Twitter Bicycle TX3900XC frame, Circuit Cycle & Sports in Millet, Alberta crafted a custom MTB. “We acquired a few 3900XC frames from Twitter Bicycle in 2019 and until now was not building the final sample until we found the perfect rims for it.” stated Brian Hahn, Certified Mechanic and owner of Circuit Cycle. “But last week we sourced a set of Velocity Dually 26er rims and the lightbulb lit up!” added Hahn.

The Twitter TW3900XC frame is a work of art.” advised Hahn. As with most bicycles worldwide, the Twitter Bicycle is manufactured in China. The Twitter particularly is well crafted, featuring smooth weld-points and internal cable routing. The TW3900XC is one of the best 26er frames available today.

The real gems are the Velocity Dually rims.

The Velocity Dually rims are considered the goto foundation for any serious terrain rider. Velocity USA is a performance aluminum rim manufacturer in Grand Rapids, Michigan. The Dually rim was designed to support tire widths from 1.95 to 3.25 inches. “These rims, married with the proper frame, allows the rider to have a fatty feel without the heavy roll of the traditional fat-bike.” advised Hahn. The Velocity Dually are designed for mid fat, and fat race and are perfect for sand, snow, trail, and everything in between. Designed with double wall for increased stiffness the Dually rims are also tubeless ready. The Dually rim retails for $190.00US, a serious component for any custom build. “We laced the Dually rims with Shimano hubs and thirty-two stainless steel spokes, providing a firm foundation while still considering the weight of the rider load,” stated Hahn.

“In all we made our custom mountain hard-tail bike into a twenty-seven speed with disk brakes. The total cost of components came to $1750.00CDN.” advised Hahn. Circuit Cycle adjusted the price to a fair-trade value which discounted the unit by $830.00CDN. The bike is listed for $1098.00 and includes a Two-Year Limited Warranty.