Group Riding in the Alberta Badlands 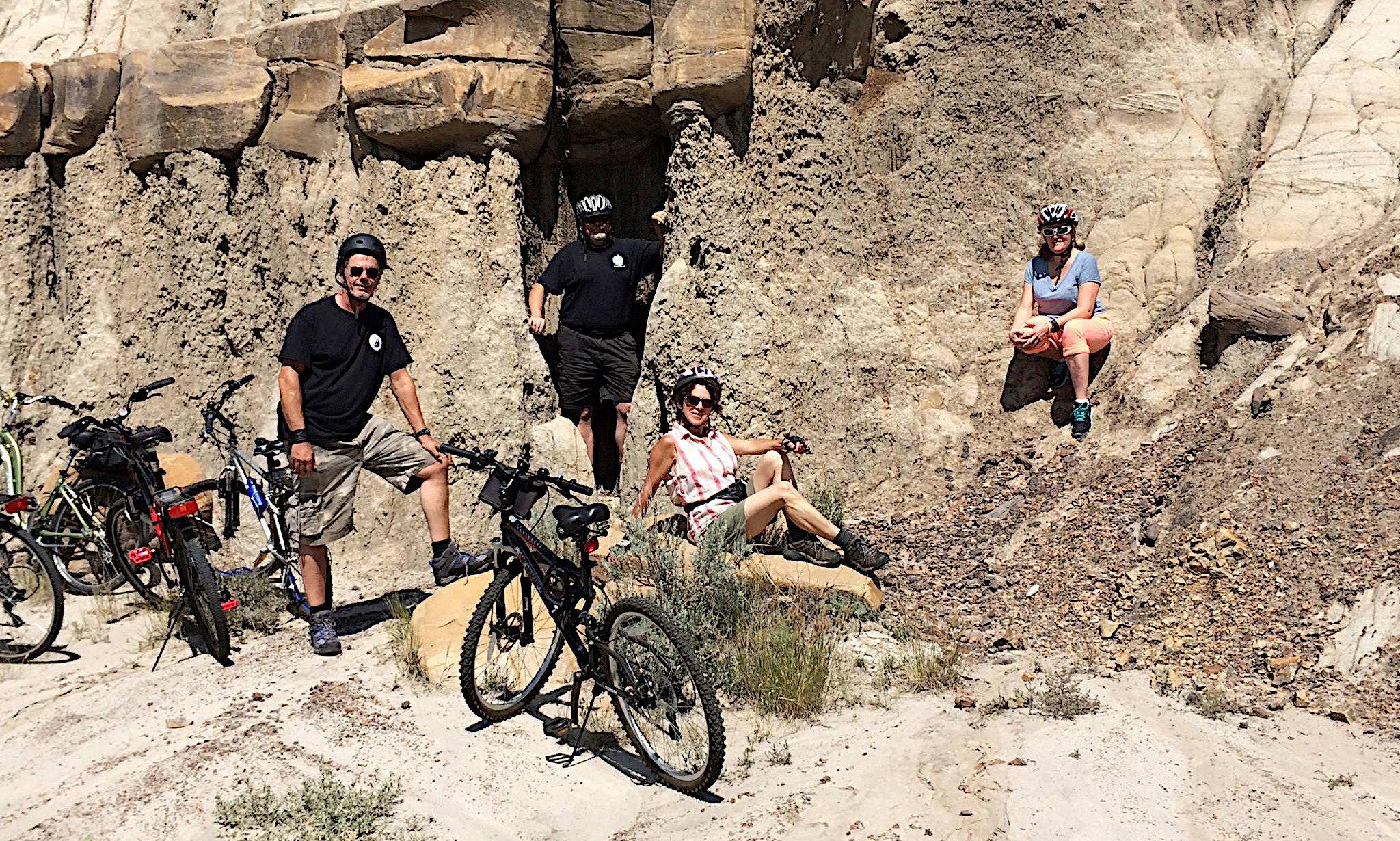 Cycling Alberta’s Badlands is probably one of the best experiences anybody can enjoy. Whether it be the roadways and trails of Drumheller, located just northeast of Calgary, or the Dinosaur Provincial Park, situated northwest of Brooks, the rider is sure to feel as if they have taken a step back into time. At least the phrase, “Toto, we ain’t in Kansas anymore,” may be a fleeting thought.

It was on this occasion, I joined a group of riders known as the Millet & Area Bicycle Club, a group that collects its members on a social media site called Meetup.com. The group, with its membership of 42, had on this particular ride, nine active cyclists, camping at the 11 Bridges Campgrounds in Rosedale.

Rosedale is situated only eight kilometers east of the city of Drumheller and is now considered a suburb of that city. The group itself was comprised of several riders, all with different levels of experience, and some with physical challenges. But what is really impressive about this sport is that nobody is left behind and all the members were considerate of each other, making sure that they remained a group throughout the weekend. Their choice of bicycles ranged from Hardtail mountain bikes with suspension front forts to hybrid road bikes with locking forks. One rider even had a full suspension mountain bike. Wheel and tire range varied, where most had the MTB 26×1.95 to the roadworthy 700c with little altitude treads for digging into the dirt. All the bikes were well maintained, and the group leader carried a full toolkit for emergency repairs.

“Cycling Alberta’s Badlands is probably one of the best experiences anybody can enjoy.”

For this trip, I chose my trusty men’s Norco Storm hybrid, consisting of a 23 inch, 7005 Aluminum Alloy Frame, 21-speed drivetrain, and a triple FSA crank with a 52/42/32 configuration. I had modified the bike from its original setup of a 42/32/22 and found even with the 26×1.75 tire and rim, I can get a level speed of 40km/h in 21st gear. I added an inexpensive suspension post to lessen the impact of my middle-aged, hamburger physique, and with a Velo gel saddle, my buttocks are no less for wear.

The path the group chose for the main ride consisted of 28 kilometers of beautiful hardtop. Although some of their riders did the trip twice over the three days of camping, and even partook in a longer sojourn deeper into the badlands, I stayed with the main group and enjoyed not only a historical saloon, but also a rather unnerving suspension bridge that spans across the Red Deer River. We anticipated the joy of crossing a creek several times that branches off the river that meanders throughout the valley leading into Wayne. The highway we chose is the 10X and the highlight is crossing that creek nine times before reaching the hotel, with each bridge and water path delighting the eyes in contrast to the geology of hills, a place where the famed Gorgosaurus was found intact, and some Hollywood Studios had used for good old shoot ’em up Western movies. To say I was rather excited is an understatement.

Our journey started off at the campground gates, where the rider is immediately met by a climb that lasts only 50 meters, nothing that is considered strenuous but did require dropping into third gear. In very short order we were met by the first bridge and were faced with the lined walls of the Badland hills. These hills are splendid and remind a person of the Arizona desert in many ways. The sides of the climbing hills, some reaching 200 to 300 feet, were decorated with layers of earth, striping the appearance, reminding us that they were formed over millions of years. Several layers of coal can be seen mixed in with what is commonly referred to as driller’s mud.

While riding along this valley it is hard not to reminisce about the settlers that lived there. Old run down buildings and livestock paddocks are mixed with a few modern homes, but sparse enough to still be in the countryside.

The cadence was easy, and I noticed that our climb was slowing as each kilometer passed, but not enough to even consider it hilly. Highway 10X, at that point, wound its way crossing that little creek; and with each bridge marked by numbers from one to nine, created a level of tension in anticipation of the famous Last Chance Saloon.

The scenery is breathtaking, quiet, and reflective. The group was lively, with humour as its main course. Aged 40 to 56, it seemed like we were a bunch of kids, stopping to take pictures, and generally making fools of each other. If only we had an audience! But that’s just the point. Traffic in this valley is very little.

Streams of motorcycles pass you as they cross these bridges, and a ‘trolley style’ tour bus whizzes by delivering groups to the hotel for some sightseeing. The highway is safe for cyclists, with lots of room to stop and stretch. And that scenery… just amazing. We arrived at the Rosedeer Hotel, home of the Last Chance Saloon, a building that opened in 1913 in what was then the dusty boomtown of Wayne. Wayne is just a shadow of its glorious past. At first glance, you would never pick out the multiple businesses that lined a railroad track. Tent city, hairdressers, houses. But what we see today is a couple of homes, a hotel, convenient souvenir store, and a campsite. The railway tracks were removed two years earlier, and the steam train that once stopped there from Stettler cannot return.

With a population today of a mere 28 souls, Wayne in 1912 had a populous of 2,500. The main draw to this community was the coal that can still be seen in the ribbon lining of the hills today. Not far from Wayne is the Atlas Coal Mine, a 400 feet deep excavation that is a tourist draw today. Inactive since 1957, the closure of that last mine was the death knell for this little town and many others in the area, including the ghost town of Dorothy, a mere 35 km away.

When we pulled into Wayne, we parked our bicycles alongside a few motorcycles mocking their parallel stance of lined Harley Davidsons and walked into the dusty saloon. So much eye candy greets you with historical photographs, a lithograph animated bandstand in the corner, an upright grand piano, money stapled to the ceiling, and bullet holes. Yes, bullet holes, left from a time when that could have been the norm.

The ride back from Wayne was quicker, not because we stopped less, only because of that slight climb (now decline) I mentioned, propelling us along. Or it could be because we were refreshed, and felt the need to reach our next goal of the Suspension Bridge across the Red Deer River, a mere 15 kilometers away.

The only real challenge to this part of the ride was at Rosedale, crossing Highway 56, to reach the main railway road to the suspension bridge. Traffic is heavier there, and rather quick.

But the ride to the bridge is where some adrenaline can rush. A slight climb that forced many riders into 1st gear elevates for about 75 meters, and then you are greeted with a rapid decline all the way to the bridge and the shores of the Red Deer River. I let my bike coast after pushing it in 21st gear and my little Schwinn speedometer recorded a speed of 45 km/hr. I was glad that I firmed up my front forks all the way, as a speed wobble would cause road rash and an unwanted test of my helmet.

The bridge itself is a real draw. Probably the busiest tourist trap, there must have been over 200 people milling about. Constructed in 1931, the bridge was built for the coal workers of Star Mine. A span of 117 meters, this pedestrian suspension bridge crosses the Red Deer River to a spot where the Star Coal Mine once employed hundreds of miners, who lived in Rosedale and Wayne. Today, it is used by sightseers, fishermen, and hikers.

A sign reminded people that the bridge had a capacity of 20 people at a time. As I walked across this swaying linkage of a pedo-path, I could not help but notice that we had almost 100 folks, all trying not to lose their balance. When we got to the other side we were greeted by dry earth, dry shrubs, and a few people standing there feeling like that chicken that crossed the road. After an awkward perambulate, we crossed again, this time putting a little bounce into our steps, a practice that is frowned up, but juvenile nonetheless.

We returned to our trusty steel steeds and rode back to camp. A barbecue and a campfire awaited us. We bragged, told a few white lies, drank a bit, and sang “American Pie” in harmony, as the other campers looked on. Yes, it was the perfect end to a perfect day, and the next promised even more.

The Millet Central Alberta Cycling Meetup Group, are an active cycling organization that conducts “hub and spoke” rides throughout Alberta.  The Badlands ride is an annual event.  Free to join, you can become a member and a participant in their next adventure HERE.