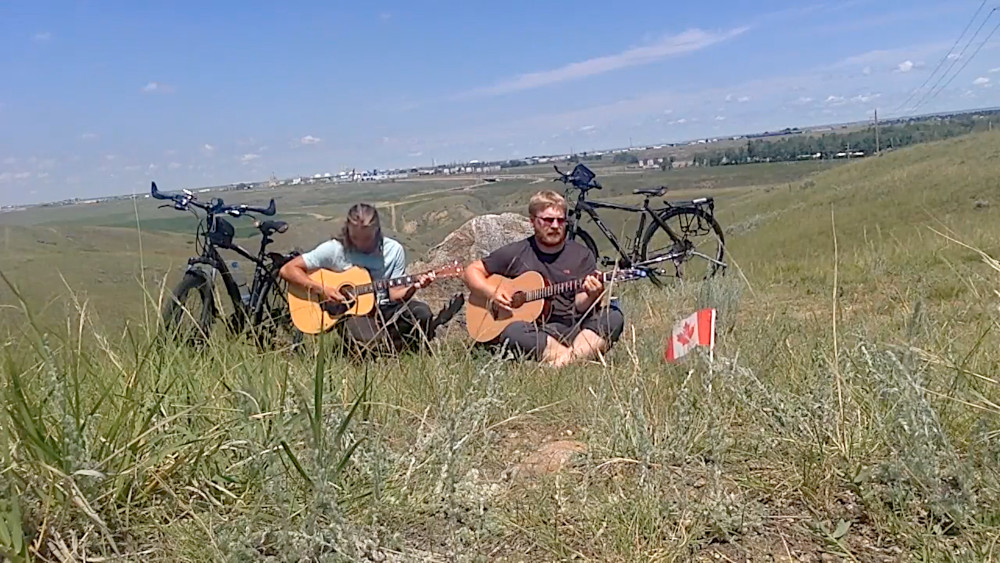 Long distance riding is not always the privy of the experienced. Case in point, Alberta boys Coltan Schell and Corey Ennis, young men, musicians, students and good friends. They met while taking the music program at Red Deer College. With the love of music between good bros, Coltan and Corey would embark of an adventure that saw them pulling single axle trailers, loaded with gear and guitars, from the Pacific Ocean to the Atlantic; an adventure that started well into the riding season in June; an adventure where the shear bravery of youth trumped minimal training and experience.

Red Deer Alberta and the beginning of a plan

The friendship started in 2010, in Red Deer, Alberta. The two would hangout after class, and on one occasion, while sitting at an ABC Country Restaurant, Coltan began talking to Corey about his crazy plan to cycle Canada, a trip that he had initially planned to do with an old high school buddy. As it turned out, his buddy couldn’t make the trip, and Coltan’s plan was to solo ride the country. Although Corey didn’t jump immediately, the thought of a road trip across Canada began to foment, “I was thinking about it, and on the drive back to our place I was like, that sounds awesome. If you’re ok with it, I’ll go with ya.” advised Corey. That was the turning point for the two musicians; a point that made them look at their bikes in a new light, from recreation to serious transportation.

“We had to keep rearranging all our stuff along the way as we started our trip, we should have had bigger panniers.We ended up with a lot of stuff tied on the sides of our panniers. Took some practice to keep the guitars tied on the trailer”

The embarkation date of June 1st was chosen, and as it approached the two men spent many mornings working on their itinerary, discussing plans for the trip; including gear, budget and of course the bikes. The idea of such an undertaking seemed very surreal until one day they walked into a small bike shop, Circuit Cycle & Sports in Millet, Alberta. It was here they had one bike completely tuned and a second bicycle purchased; a Brodie Salish, along with two single axle trailers from Maya Cycle. Leaving that meeting with a mechanic name Brian at Circuit Cycle, surreal turned to reality as the overall tone between the two was, “Ok this is actually happening”.

According to Corey, “All our packing was super last minute. It took forever to get loans for the trip, and then we were scrambling to purchase all our gear in the last couple weeks. We picked up some panniers and received our tents in the mail a couple days before leaving. My parents came and we loaded everything in their van, and they drove us fifteen hours from Edmonton to the Vancouver ferry, and from there to Victoria.”

“We had to keep rearranging all our stuff along the way as we started our trip, we should have had bigger panniers. We ended up with a lot of stuff tied on the sides of our panniers. Took some practice to keep the guitars tied on the trailer,” added Corey. Guitars! Yes full size guitars added to the load on the trailers. Loaded with guitars was not even an issue, as these two made their way around Vancouver Island and eventually across Canada. The two would discover that on their next trip they would be better prepared, and that some gear just does not work. “Rain gear we discovered is pointless,” said Corey, “it just makes you sweat way more so you end up soaked anyway.” The solution for Corey was to quickly replace most of his gear with Driwear clothing, a selection Coltan discovered worked well.

Other discoveries were that cushy bike seats just don’t work and ended causing a lot of pain. The solution was to choose a firmer saddle, sized to the rider. A big surprise was to do with trailers. “Trailers are a pain,” said Corey, “but we had to have them for the guitars, but everyone we talked to who used trailers or knew others who did said that they always had problems, especially on really long trips.” Corey added, “Biggest thing for me was I just didn’t really have enough storage, everything was just kind of stuffed in, impossible to organize well, which meant extra time packing up every morning. Our Tric ™ guitar cases kept our guitars in perfect shape and protected from the weather and humidity perfectly.” The route they chose was the most direct, traveling along the Trans-Canada highway Corey and Coltan had opportunities to connect with many Canadians, and play music in the mountains, the prairies, the Canadian Shield, and onto Halifax, NS. “We played an open mic in Wolfville, NS,” stated Corey. “We were jamming in a park near a reservoir, a backpacker from Montreal, who also had a guitar with him, was there.

After we jammed, he told us about the open mic at a bar. So, we went and played. Coltan played drums, and I on my acoustic guitar and vocals. The backpacker dude (who’s name escapes me) also played. He was really good.” Busking was also a way to earning their keep. At a camp where the Montreal River meets Lake Superior, these two Albertans played for a group of people around a bonfire, in exchange for a free meal. However, their music was mostly played for fun, and for filming music videos for their YouTube Channel.

With the vast distance, came mechanical issues. Trailer issues where plenty, as the weight of the gear along with the single axle design caused Coltan’s trailer hitch to break twice; an event that caused them to choose their final destination of Halifax, shorter than the St. John’s Newfoundland destination initially discussed months earlier at the ABC Country Restaurant.

But these mechanical failures only brought out the best in Canadians. “We met lots of awesome people,” stated Corey. “The trailer broke down in Quebec in the middle of the rain and a lady named Miriam, who lived nearby, took us in. She fed us and let us stay the night. The next day she took us to the bike shop and acted as a translator since we didn’t speak French. Saved the trip basically.”

“We met many people that were interested in what we were doing and would offer us help along the way,” added Coltan Shell. “From giving us a couple bucks outside of a restaurant to offering us there homes to stay in, the goodness in people was a refreshing part of the trip.”

“Dave and Patsy in Red Rock, Ontario, are an especially great memory,” said Coltan, “We met them outside a gas station in Thunder Bay. They were interested in our trip and talked to me for a few minutes. After driving away they came back and offered to put us up for the next night at their home in Red Rock, which was about 100kms away. So the next day we cycled to their home in Red Rock and spent a wonderful evening getting to know them and learned about the town. We learned that this was the first time they had opened there home to travelers!”

“Another great thing about this trip was learning about an online cycling community called ‘Warm Showers’,” stated Coltan, “We met a riding couple, Chris and Linda, from England who were cycling Canada and they enlightened us about the organization.” Coltan advised that through

Warm Showers a cyclist can send requests to different cities to be hosted by other cyclists in there homes. As it turned out, Coltan and Corey used this several times with each encounter a delight!

“The trip was very challenging in many ways, physically, mentally, and financially, but was very much worth it!” stated Coltan. “The hard times made the good times exponentially better. Whenever we stopped for a break on the side of the road and then decided to carry on “one more time” started to become the go to phrase.” A major highlight for Coltan and Corey was taking in the “Tragically Hip” concert in Ottawa, which saw them meet another great couple, Eric and Diane, who hosted them for two days before they moved onto Quebec. “Quebec was a dream to cycle in,” stated Coltan, “except for the language barrier!” Coltan advised that riding Quebec was mostly flat terrain with many rest stops, complete with running water and places to stealth camp near the St. Lawrence River. “There was also “Le Route Verte”, which is a cycle trail that spans throughout Quebec which you can follow,” added Coltan. “All in all very cycle friendly!”

“We actually ended the trip in Halifax because we wanted to get to the Atlantic Ocean,” advised Coltan, We ended up staying with “Dale and Jenna” in Dartmouth, very close to the ferry that takes you to downtown Halifax,” Coltan added. “Jenna is a co-owner of a bicycle shop in Halifax and Dale is in the Navy. Such an amazing couple!”