Fat Bike: The Rise of the Beast

Putting You and Your Family Back in the Saddle. 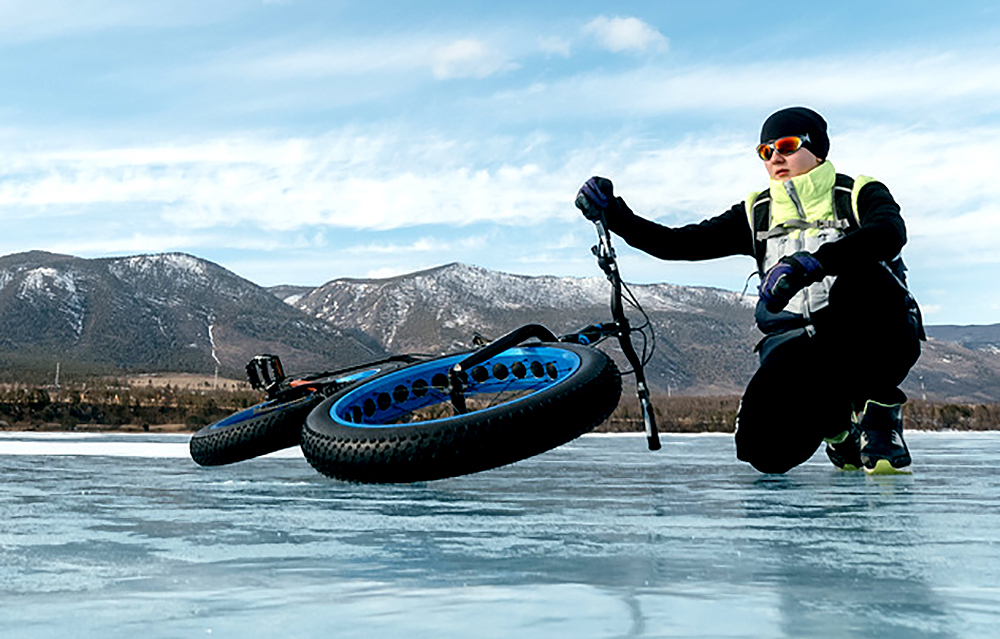 It used to be that winter was a time for the cyclist to hang up the old helmet and hibernate until spring. Well, there are the diehards who commute to work on their bikes and pity the ‘caged animals’ chugging along in their cardio-leaching motor vehicles (but they’re another animal and many of us keep our distance. They bite) Now, not even winter can be an excuse to stay indoors, sipping hot chocolate next to the fireplace. The fat bike is here to stay and silently mock sedentary Yuletide habits. For people who want to get out into the snow, but have a loathing for skis and snowshoes, the fat bike may well be the steed of choice.

For traditionalists, the fat bike looks like a mountain bike had an illicit love affair with a Hummer. Tire widths of up to 5 inches are not uncommon. The frame of the fat bike is built to handle the oversized tires and the challenges of staying upright when crawling over snow and ice. When compared with average bicycles, however, one has to admit that the fat bike looks like something that Bozo the Clown might ride into little Sally’s 7th birthday party.

It has been claimed that the modern fat bike can be traced back to two places and two contrasting biospheres. At first glance, boreal forest and tundra are quite literally the polar opposite from the American desert. When it comes to cycling, however, some of the terrain is oddly similar.
The year 1987 saw the first Iditabikea long-distance bicycle race that followed part of the famous Iditarod dog sled race trail in Alaska. As the race grew in popularity, so did the attempts to create a better bicycle for snow. People would connect two or three wheels together and customize frames to accommodate. Fairbanks resident Simon Rakower started building specialized rims that could take a single wide tire, ending up producing the Snowcat.

Six thousand kilometres to the south, Ray Molina was experimenting with sand dunes and alluvium in New Mexico. Molina created specialized rims that fitted a 3.5″ tire and then made frames that would fit. The big, low pressure tires ended up working as well on sand as Rakower’s Snowcats did on snow.

Fat biking remained relatively obscure in both Canada and the U.S. until 2005. Surly, a company based in Minnesota, produced the first widely available fat bike frame: the Surly Pugsley. At over 15 kg, this was a bicycle designed for staying upright, not for speed.

“For people who had laughed around on their mountain bikes in the winter, the 3+ inches of tire width had lynx-like ability to grip whatever surface there was and use it for traction.”

It was fun, though, and that was the thing. For people who had laughed around on their mountain bikes in the winter, the 3+ inches of tire width had lynx-like ability to grip whatever surface there was and use it for traction. The low tire pressure and all-around geometry of the fat bike made it easier to stay upright at lower speeds. Suddenly winter biking seemed like something that could be accessible to more people than the rare breed of all-season commuter cyclist.

As more people bought them, fat bikes started hitting the racks in bike stores in the U.S. This spurred Surly, Salsa and a select number of other bicycle companies to start producing complete fat bikes. The Surly Pugsley became eclipsed by lighter and faster models. Today, you can get fat bikes made with carbon fibre and full suspension, although the classic rigid model seems to remain the most popular version.

As the fat bike got bigger in North America, so did the issues surrounding it. Reasons for hating the fat bike range from simple to complex, from looks to winter trail access. As with any reimagining of a traditional concept, suspicion followed the inception of the fat bike. “It’s just ugly!” was a common refrain back in the early 2000s, when these bikes were just coming into the general market. “Clown bike”, was the most common sobriquet. To the lovers of sleek, slender bicycles, the fat bike seems like something from Dr. Moreau’s Bicycle Shop – an unsettling mismash of parts intended for other things.

The fat bike’s image suffered from some very real issues with weight and handling in its early years. Some criticism noted that heavier fat bikes were harder to get up to speed and slower to stop. The downhill handling was also less responsive. Now, this is something that has become less and less of a problem – the Norco Ithaqua carbon fibre frame weighs in at 2.7 lbs.
Bike mechanics have had challenges in the early years of the fat bike; most bike shops in the year 2000 didn’t stock things like 5 inch tubes or rims to match. Even today, though, many smaller bike shops used to servicing road and mountain bikes might have to order in fat bike components. As popularity has surged, so has the availability of componentry – but it’s worth it for the fat biker to check out the bike shops in any new area they propose to conquer with their 2XL tires.

The fat bike’s explosion in popularity has led to some conflicts with lovers of more traditional snow sports. Petitions urging the restriction of fat bikes from ski trails have been made, due to the way the tires bite into and disturb the surface of the trail. Canmore Nordic Centre has restricted fat bikes to ungroomed trails, leaving groomed trails to the skiers. Trail access is being constantly debated – who gets access, where, and when. There have also been rumblings from the fat bike crowd about trail maintenance and ‘interference’ from other trail users, who disturb the trails while they are ‘setting’. Fat bikes don’t perform for every type of snow; hardpack is best. Woe betide the hiker or snowshoer who disturbeth a fat bike trial while it is setting!

As with other outdoor access conflicts, most of these cyclist-vs-the-world issues can be solved with sensible access rules and trail maintenance. Outdoor trail etiquette coupled with respect for access rules solves many fat bike issues, just as it solves most real-world issues concerning the great outdoors.

“To the lovers of sleek, slender bicycles, the fat bike seems like something from Dr. Moreau’s Bicycle Shop – an unsettling mismash of parts intended for other things.”

Up in the Northwest Territories, fat bikes are making their way across Great Slave Lake and along trails that used to be the sole province of snowmobiles and dog teams. On March 4, 2016, Kouchibouguac National Park in New Brunswick introduced the first Fat Biking Week. Edmonton and Calgary are seeing an upsurge in newly confident winter commuters, floating above the earth on huge tires. Even Alberta Provincial Parks are getting in on the growing interest in winter fat biking. A number of parks are now offering designated trails to fat bikers. The Parks Canada website provides maps, trail lists, and advice for trails in Kanananskis. Jasper National Park lists fat biking as one of the options for winter sport.

Most notably, the fat bike has started to conquer trails outside of the winter season. In Fort McMurray, University of Alberta scientists have used fat bikes as a replacement for ATVs. The Norco Ithaqua, a carbon fat bike, has gotten rave reviews on the North Shore of British Columbia for its handling – you gotta respect the bike, though! – and climbing abilities. Fat bikes are increasingly visible in the bikepacking demographic, where the ability to stay steady on uneven terrain with a full load is the primary goal.

Not Losing This Any Time Soon Today, manufacturers are vying with each other to produce the lightest, most responsive, toughest frames and rims. People are taking fat tired cycles to Antarctica. We’re seeing more cyclists on the snowpack than ever before. From humble beginnings as Frankenstein’s bicycle to a sleek(er) machine capable of handling some of the most challenging terrain our planet has to offer, it would seem that the Crocs of the cycling world has come into its own.