Fat Bikes: Are They Slower? 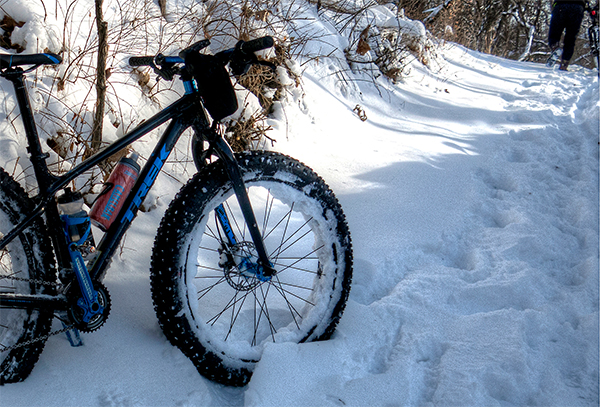 Without question, the first thing on everyone’s mind when they walk into a bike shop and see these cartoonish bikes with the monstrous tires for the first time is how they must be impossibly difficult to pedal. People commonly associate “narrow and high pressure” with fast and “wide and low pressure” with slow. In this sense, fat bikes must be the epitome of sluggishness. Though more recent research suggests that fatter tires are not necessarily slower. In fact, sometimes they are even faster, depending on the terrain that is ridden on.

Before fatbikes became available to the masses, there were still fatbikes being produced and used. These were often bikes built specifically for long distance events that involved lots of snow, such as the Iditarod Trail Invitational: a 1,000-mile long race across Alaska’s snowy tundra in the thick of Winter. Crude in design, these bikes often got the job done with two standard-width mountain bike rims welded together in order to give the mounted tire a larger footprint. Frames were custom-built around components that were not fit for purpose, so compromises had to be made.

Despite the use of overly-heavy downhill components and tires, these bikes actually excelled at what they were meant to do: float over snow. The massive footprint of the tires enabled the rider to ride over snow and ice more easily than standard mountain bikes (of course, it was still quite an effort to ride 1,000 miles across Alaska in the Winter regardless of the bike). Though very niche and much heavier than their standard-width tire counterparts, these primitive fatbikes were much faster.

So, are fat bikes actually slower than a standard mountain bike?

You can probably guess that the answer is: It depends.

Generally, things like snow and sand are where fatbikes excel, since normal-width tires (i.e. 2.2”) would not even be able to trudge through this kind of terrain. It makes sense here that fat bikes will be faster. However, this is not the only scenario where fatbikes should (and could) be faster.

Fast forward to the fat bikes of today, which include major technological advances in frame material and componentry, and you’ll find that fatbikes exist that are as light as a low-end road bike. Given the monster-truck capabilities of their tires, and the possibility of creating lightweight fat bikes, it’s no wonder every major bicycle brand has picked up on this. Simply put, fatbikes started as a specialist machine designed to float over snow but are now being marketed as a slightly heavier “do everything” mountain bike, especially for those first getting into mountain biking. The wide tires not only offer float, but a high amount of traction that turns out to be quite confidence-inspiring for the beginning rider.

“Despite the use of overly-heavy downhill components and tires, these bikes actually excelled at what they were meant to do: float over snow”

This last point on confidence is a major point that many riders underestimate. Many pros feel extremely confident in their bike handling skills with normal-width tires on terrain that can be extremely treacherous. However, most cyclists are not professionals and therefore might not have the death-defying skills on a bike that those who ride down mountains at full speed do. When a rider feels more confident in their riding, they are able to take turns at higher speeds, take jumps and drops they wouldn’t normally take, and generally have to dismount fewer times on more challenging terrain. Though the “riding time” might be slightly longer on a given course for fat bikes because of its extra heft, the degree of confidence it offers will allow a rider to make fewer mistakes and ride over obstacles they couldn’t normally do. This ultimately, though indirectly, results in a faster overall ride.

Rest assured, however, you won’t be seeing fat bikes completely taking over the mountain bike market. In truth, a carbon mountain bike will always be lighter than carbon fat bikes. And weight savings certainly do make a difference, even more so as the trails become smoother and rolling resistance becomes more of an issue. And although fatbikes offer tons of “built-in” suspension via their tires, this type of suspension is very different from the dampening systems built in to full-suspension mountain bikes. That is to say, there are still performance differences and, assuming normal trail conditions, a regular mountain bike will usually be faster.

So what is the future of fat bikes, if there is one? Assuming they are not just a fad, how will they make themselves stand out from all of the other advancements in bicycle technology in the years to come? One way might be with electric-assist motors, more commonly known as ebikes. Aside from being an entirely new market altogether, electric-assist motors have come to a point where putting them on bicycles is actually viable. Many people who wouldn’t be able to cycle otherwise can now do so and regain confidence with the assistance of a motor (note that it is indeed assistance, as some amount of pedalling torque is necessary for the motor to activate). But for fatbikes, they take rolling resistance totally out of the equation. Even if fat bikes are slower than many other types of bicycles, attaching a motor renders this a moot point.

It seems pretty farfetched to envision a world where everyone rides electric fat bikes – they are essentially a niche of a niche and represent the interest of a very small subset of cyclists. But no one can deny the monstertruck-ability of these machines. They may be of some use to Winter commuters in cities with wide roads and lots of ice, such as Edmonton. The wide tires would certainly lend more confidence while riding at speed over slick, frozen roads, and the motor will help the rider get to their destination much faster.

In general, however, most cyclists may find fat bikes and e-fatbikes alike simply too big of a burden – literally. In situations where space is at a premium, fat bikes realistically have no place. Therefore, their purpose moving forward may not best be suited to city riding, but could prove extremely useful in rural situations. For the truly eco-conscious, hauling farming supplies, for example, could easily be done with fat bikes (and this is exactly what Surly’s new Big Fat Dummy model is aimed at).

I do think fat bikes are here to say, though it will be interesting to see how they develop. They have come a long way from the first production fat bikes over a decade ago, and even further from the custom machines used on the Iditarod prior. With new developments in tire, frame, and bearing technology, it’s plausible that the fat bikes of tomorrow may be faster than the road bikes of today. Regardless, fat bikes are currently a fun way to explore trails and areas that were previously inaccessible with normal-width tires. It is in these areas where fatbikes are faster and are more enjoyable above all else.