Santa Claus: Which Bicycle Would He Ride? 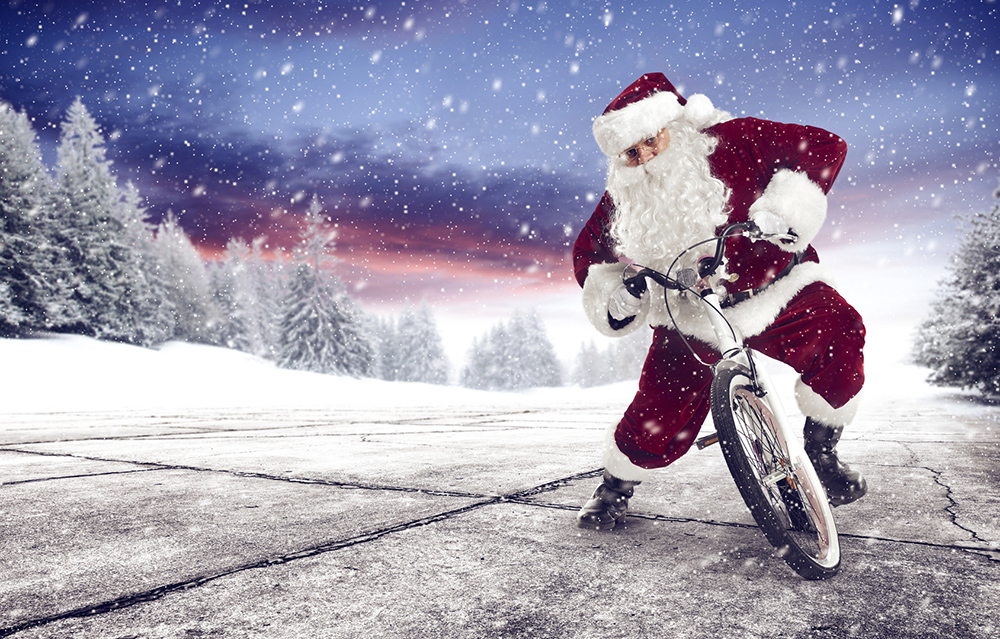 We all know that good ole’ Santa Claus flies a sleigh pulled by Dasher, Dancer, Prancer, Vixen, Comet, Cupid, Donner, Blitzen, and Rudolph. Or at least that’s what we are meant to believe. But what you have never heard before is that Santa has a bicycle mounted on the back in case the reindeer tell him to “beat it!”  It’s true; I have never lied to you before. Have I?

Well, the only problem is that for many years, a group of people from Lethbridge has been actively trying to learn what that bike actually is. While, in Calgary, a couple of women were arguing that it’s not a bike, per se, but it’s a roll of plastic known as a “silly carpet”. This difference came to a head while on a radio talk show from CHUA, AM1520. The ladies were called ‘nuts’ and the group from Lethbridge was called ‘heretics’. Both parties shall remain nameless, to protect the innocents; if there are any.

Not to be left out, we at Circuit Cycle decided to weigh in on the discussion and enter the fray with our own theory.

But we got smart

Tucked away at the Space Science Centre in Edmonton is an old photograph that was taken on December 23rd, 1966 using a 120mm Meade Refractor telescope. It’s from Kodak C120 film, so it is quite grainy. But after some nifty computer work by a close friend and uber-geek, we could clearly see that Santa has a tricycle strapped to the back of the sleigh. So, the answer is simple. St. Nick pedals a tricycle if the sleigh breaks down.

News of our findings got out and the Lethbridge Group (LGB) are saying that a tricycle could not possibly carry all the parcels, obviously forgetting that Santa is magic… “duh!” The LGB must have forgotten that tricycles have a flat step in the back on which to strap the bag. At this, they retorted, “St. Nick is not going to drag his bag in the cold snow!” The two women from Calgary (let’s just call them “the women”) argued that “Tricycles are for kids. Santa is at least 100 years old, or even older, kinda.”.. .whatever that all meant.

But we are open to a discussion; so it was decided instead of arguing about Santa dragging his bag, or sliding his ass into the snow, we got together and made a decision. The women and the LGB, along with our staff, are building him a new bike.

The only problem is that we can’t agree on specifications. The women want it to be a fat bike. . . “considering the source, it makes sense. “The LGB wants it to be a yellow Mixte, with a soft wide seat, and basket . . . “no comment.” Our staff was considering a light alloy frame with a set of mean 29er tires and rims matched with a 10 x 2 drivetrain.

We still have a few weeks to get it to him, and considering how good Canada Post is, we are confident that he will get it by next Christmas.